You are not connected. Please login or register
2 posters

Favoured option to get rid of Nero?

Anyone come up with any cunning plans yet?

Aside from worrying about exactly how nutty Richard is going to get with Nero if no one makes a move I think the interesting question for a lot of the stronger military positions is do you look to keep out of trouble early so you are ready to make a move or do you start cracking Barbarian heads in order to win Glory with the troops and the senate and people.

So is the thread going to be : "Rome and the curse of the silk PJ's" or somthing else?
Johntindall 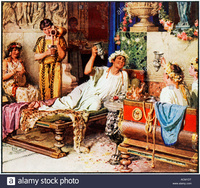 Why do you assume Nero is a problem?

He's stimulating the economy through public works, keeps the plebs happy and the Empire is (mostly) at peace. Who are you suggesting could be better?....

Re: What to do about a problem like Nero?

Johntindall wrote:He's stimulating the economy through public works, keeps the plebs happy and the Empire is (mostly) at peace. Who are you suggesting could be better?....

When the game starts most of Rome has just burnt to the ground and the Emperor has taken advantage to grab one of the seven hills of Rome to start building a huge and vastly expensive palace while the rest of Rome scrabbles around in the ashes to rebuild. Plus he has murdered his mother, probably his brother, and various of his good ministers. Even worse he has taken up acting and playing the Lyre which is all very un-Roman. He is hugely unpopular in Rome itself, but plenty of places outside Rome still think he is a very good Emperor.

In Nero's favour most of the Empire is at peace and ticking along. Also the savage in-fighting of the Imperial Julio-Claudian family has basically reduced possible heirs to "0" so the Caligula option of a quick knife strike and replacement with a harmless old Uncle is not going to work and could easily tip the Empire back into the civil wars of Sulla etc

Also in Nero favour is that unlike Caligula he may be unstable and erractic but he is not a total pycho nutter, he can still be charming and most of the leading Romans of this period are either old friends of the Emperor or are closely linked with Nero Government. All the Pro-consuls have had the highest honour a Roman can gain given to them by Nero, the commander in Germany and Otho are old chariot racing cronies etc, etc.

Basically, I am playing a character who is still loyal to Nero but basically see's his old friend under huge pressure and is trying to pull him back. The question is will players take some of the pressure off the Emperor........a smashing victory over Dacia, Parthia or even beating up a load of blue barbarian and getting our Eagle back would be great. Or will pressue continue to mount causing the Emperor to do some of the really crazy things which lost him key support?

But other players may have already decided that enough is enough and have started to make their moves.

And this time its probably not a case of the Senate doing job interviews! Its going to come down to who the three main Army blocks of a) The Rhine b) The Danube and c) The East want.

The Armies on the Danube seem to be making a move but if they suffer a defeat that could dent political ambitions, while a victory will do thir generals a power of good. But what will they then do with the victory?

I suspect many are waiting for a "stalking horse" to show who is still loyalists and who is not. The other thing which may cause the game to vary massively from History is the influence of outsiders. Not even in Britannia, Gaul or Germania but already starting to see a Druid behind every tree! Eastern players are probably starting to imagine a Seleucia Jew agent from Pathia on a every camel train. And is it me or are a lot of hairy horsemen starting to move west rather early?

At current rate Army could be too busy ducking arrows to have a civil war, Nero could die in his bed aged 72 and Rome will still be a building site!

Re: What to do about a problem like Nero?